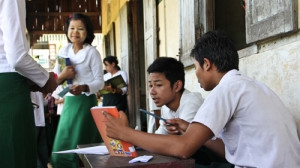 Only the teacher’s raised voice could make them fall silent again. “If you don’t keep quiet, I won’t let you borrow books.”

The children of Kawhmu township, an hour’s drive from the southern bank of Yangon river, were about to be visited by a bookmobile – the country’s first and only mobile library service.

As the bus rolled to a stop at the gate of the Basic Education High School of Nat Sin Kone Sanpya village, an excited crowd of students had already formed a queue.

“I am very happy on the days when the mobile library comes to school,” Ma Khin Ni Tar Bo, a ninth-grade student, told The Myanmar Times on September 10. “I have often visited the library in my village, but it offers only time-worn books and periodicals. The mobile library is well stocked and holds recently published books.”

The project is the brainchild of Daw Aung San Suu Kyi, who recalls mobile libraries from her stay in the UK and knows of their benefits, said U Thant Thaw Kaung, director of the Mobile Library Project, which is also a part of the Daw Khin Kyi Foundation, named for Daw Aung San Suu Kyi’s late mother.

“She [Daw Suu] wanted to set up a mobile library in Myanmar for quite some time,” U Thant Thaw Kaung said. “Finally Ms Natsuo Miyashita, an old friend of Daw Suu’s from Oxford, was able to find a donor.”

On July 29, the first of two buses donated by Hino Motors of Japan started making the rounds of Kawhmu township, which Daw Aung San Suu Kyi represents in parliament and has an estimated population of 127,496. The bus now reaches 21 of the township’s 126 villages: The library stops at a village a day, sometimes two if they are close together and the roads allow it, and sets up at a school library and a village library in each place, spending three hours at each. The bus then returns two weeks later to process returns and let members sign out new selections.

So far the Mobile Library Project has collected over 15,000 books from local and foreign donors, with 30 copies of more than 500 titles. Subjects covered include books for children, morality tales, self-help, famous works of fiction, reference books and books on agriculture, livelihood and health education, all in the Myanmar language.

Each student or village resident is entitled to borrow two books at a time for two weeks and they can extend the loan another two weeks if they wish.

Ko Saw Nyi San, operations manager of the Mobile Library Project, commutes from Yangon to Kawhmu township every weekday. He said the public appetite for reading is such that the library can barely keep up with the voracious demand.

“Some villagers say the two weeks takes too long. They finish a book within two days and they want us to come back more often.”

Another ninth-grade student, Maung Myo Thiha, said he and his friends trade books around once they’ve finished them, to tide themselves over until the mobile library returns and they can sign out more.

Asked about the possibility of visiting villages more frequently, Ko Saw Nyi San said that poor road conditions in the township would make that difficult.

“Yesterday we tried to reach another village called War Balauk Thauk and it took almost two hours to get to there. The old road to the village is impassable for a big bus,” he said.

As difficult as transportation is, it’s the very thing that makes the mobile library so valuable, he said.

“ In the past, they went to a library if they wanted to read. Now the library brings the books they want to read to them. It makes a difference to their lives.”

“Sat Su village doesn’t have a library. They want to set up a library so they are saving money and now they have collected K800,000 but it’s not enough.”

The village is located on the main road to Tha Khut Pin village, which has a library and is visited by the mobile library. Daw Myint Myint said that when villagers in Sat Su saw the mobile library passing, they stopped the bus and asked it tos come to their village as well.

U Thant Thaw Kaung said the project members are very glad to see the enthusiasm and interest in the community.

“At present, we are increasing our membership at a rate of 200 members a day. We got 1000 members after our first week of operation,” he said, estimating current membership at more than 4000. He added the growth will continue in the future, as there are many students still to register at the schools they have visited.

“In many schools, all the students want to become members of our mobile library. We hope to see hundreds of mobile libraries running around the country successfully in the near future.” 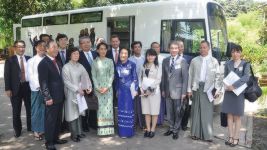 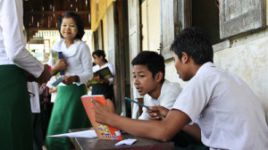 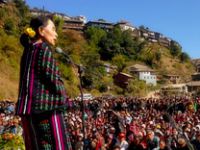